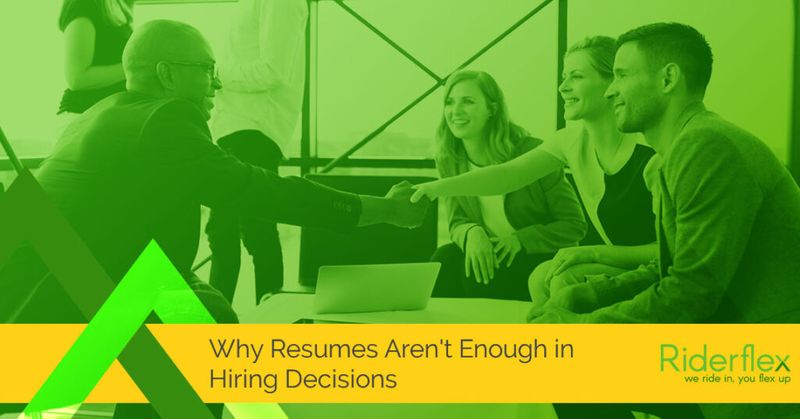 Hiring can be tricky, and it’s especially difficult when your hiring for C-level positions, like CFO, CEO, CIO, or CTO. It’s also an expensive process that costs even more if you get it wrong. And, unfortunately, one of the easiest ways to end up with the wrong candidate is to hire based on resume alone.

5 Reasons You Shouldn’t Base Hiring Decisions on Resumes

#1. Resumes only focus on a candidate’s experience.

A resume is all about the candidate’s past experience — the jobs they’ve held, what their duties were in those positions, how long they held them, etc. And while experience can certainly be a good thing, it’s not everything. In fact, in some cases, a lot of experience can actually be detrimental to a candidate’s ability to change with the times.

Think about it. Someone who has been a CEO for 20 years has developed a certain way of doing things. Their experience has taught them a lot, but it can also make it difficult to adjust to new ideas and changes that are necessary for future success.

There’s nothing wrong with valuing experience, but it, in no way, should be the only thing that you value. And, if you get too caught up in judging a candidate by their resume, you could easily end up putting far too much stock in their experience alone.

#2. Resumes are centered around job titles, which can be misleading.

The traditional resume format is organized by a candidate’s job titles. And, while job titles may be perfectly clear to the candidate, it’s not always easy to tell what a position actually is with job titles alone.

The fact is that there are no universally accepted job titles, and some organizations are more creative than others in naming positions. For example, how are you supposed to know that a “Wizard of Light Bulb Moments” is actually a marketing director or that a “Digital Overlord” is a website manager?

With so much freedom in creating these job titles, it’s nearly impossible to figure out what some of these job titles mean and what importance they carry within the organization.

Soft skills are the intangible qualities that separate candidates that are merely qualified to do the job and candidates that will be an asset to your organization. They include things like teamwork, punctuality, communication, discipline, accountability, and the ability to accept change.

The only thing you can learn from a resume is that the candidate did a job. But, when you can dig a little deeper and learn about a candidate’s soft skills, it teaches you a lot more about how they did the job.

Resumes are a lot like highlight reels. They put a spotlight on accomplishments and gloss over everything else. What’s more is that they openly invite embellishment. In a survey conducted by ResumeLab, 93 percent of respondents said that they knew someone who had lied on a resume, with 18 percent lying about skill, 27 percent lying about experience, and 17 percent lying about job duties. The same survey also found that only about 31 percent of people who lied on their resumes were ever caught.

#5. Resumes don’t give you insight into a candidate’s potential.

There are a lot of things a resume can’t tell you about a candidate, one of the most important of which is a candidate’s potential. Hiring for potential is one of the best ways to find the best person for the job because it’s based on the passion a candidate has for the job and their desire to exceed expectations rather than just their experience alone.

Potential isn’t something you can learn about a candidate from looking at their resume. Hiring for potential requires you to take a deeper dive into getting to know a candidate, which takes more time and energy. However, it’s well worth it in the end.

One of the reasons so many hiring managers and employers make the mistake of hiring by resume is that it’s a lot easier to look at a candidate’s experience than it is to get a full understanding of the big picture. That’s why Riderflex has set out to help.

As Colorado’s premier executive recruiters, everything we do is about finding you the right candidate. And, since we’re only as successful as you are, we’re invested in helping you get it right.